Public Finance for the Future We Want: Opportunities for democracy amidst the next crisis

When the US financial system collapsed in 2008/09, ushering in one of the worst economic crises since the Great Depression, many people expected that significant reforms would be made to the system of extractive finance capitalism at the root of that crisis. So far, few notable reforms have come to fruition. Ten years after the crisis, The Democracy Collaborative (TDC) has co-published a book with the Transnational Institute (TNI), the New Economics Foundation (NEF), the Tellus Institute, Change Finance, Focus on the Global South, Fairfin, and the MOBA Housing Network on the potential for alternative approaches to the finance system for a move toward a more democratic and just economy. Entitled Public Finance for the Future We Want, the book includes two chapters penned by TDC team members Thomas M. Hanna and Carla Santos Skandier discussing the role of anchor institutions in community wealth building and the potential for a public buyout of fossil fuel companies, respectively.

Thomas points out that during the 2008/09 financial crisis, instead of restructuring the foundations of the financial system (as was done after the 1929 crash) or distributing public support widely, the government poured considerable sums of money into bailouts of enormous corporations, effectively saving the 1%. Because of this, and despite the immense hardships that faced so many Americans, the financial industry continues to pursue profit maximization at any expense rather than economic stability for the majority. Thomas points to the Community Reinvestment Act as evidence of the need to shift incentives in order to achieve any community investment from firms; in other words, corporations will generally only invest in the community if mandated to do so.

Thomas juxtaposes this extractive financialized capitalist model with “Community Wealth Building,” a term coined by TDC in 2005. Rather than relying on corporate attraction and retention, community wealth building seeks to build wealth locally and from the ground up through 8 guiding principles.Community wealth building redirects capital and assets to create a new, more equitable system. One way to do this is by leveraging the economic activity of anchor institutions—large, public, not-for-profit, and place-based institutions that are rooted in their local community by mission, invested capital, or relationships.The scale of these institutions is such that shifting only a small percentage of their activities could generate significant local economic activity and development. Their procurement, investment, and workforce choices can redirect resources to disinvested areas, offering revitalization without displacement. This restructured system, where anchors consciously reinvest in and tend to the community, builds local economic resiliency and actively combats extractive capitalism and its inevitable consequences. As Thomas points out, “another financial crisis is a certainty; only the questions of timing and severity are up for serious debate” (104).

The same can be said for climate crisis. Carla makes clear that we urgently need a just energy transition, and it must begin by breaking the fossil fuel industry’s control over the political system. To accomplish this, she proposes a federal buyout of at least 51% of the shares of major US-based fossil fuel companies in order to decommission or re-purpose them. Public ownership would remove the profit-maximization drive to extract and burn as much fossil fuel as possible and would liberate politicians from the industry’s financial stronghold, potentially enabling us to keep fossil fuel assets in the ground. To accomplish the buyout, Carla proposes quantitative easing (QE), as was used by the Federal Reserve and other central banks during the last crisis. This process refers to the ability to inject money into the economy through money creation and purchasing government bonds and other securities from the market. QE was used after the last financial crisis to bail out bankers and financial institutions. Perhaps now it could be used to save the planet. 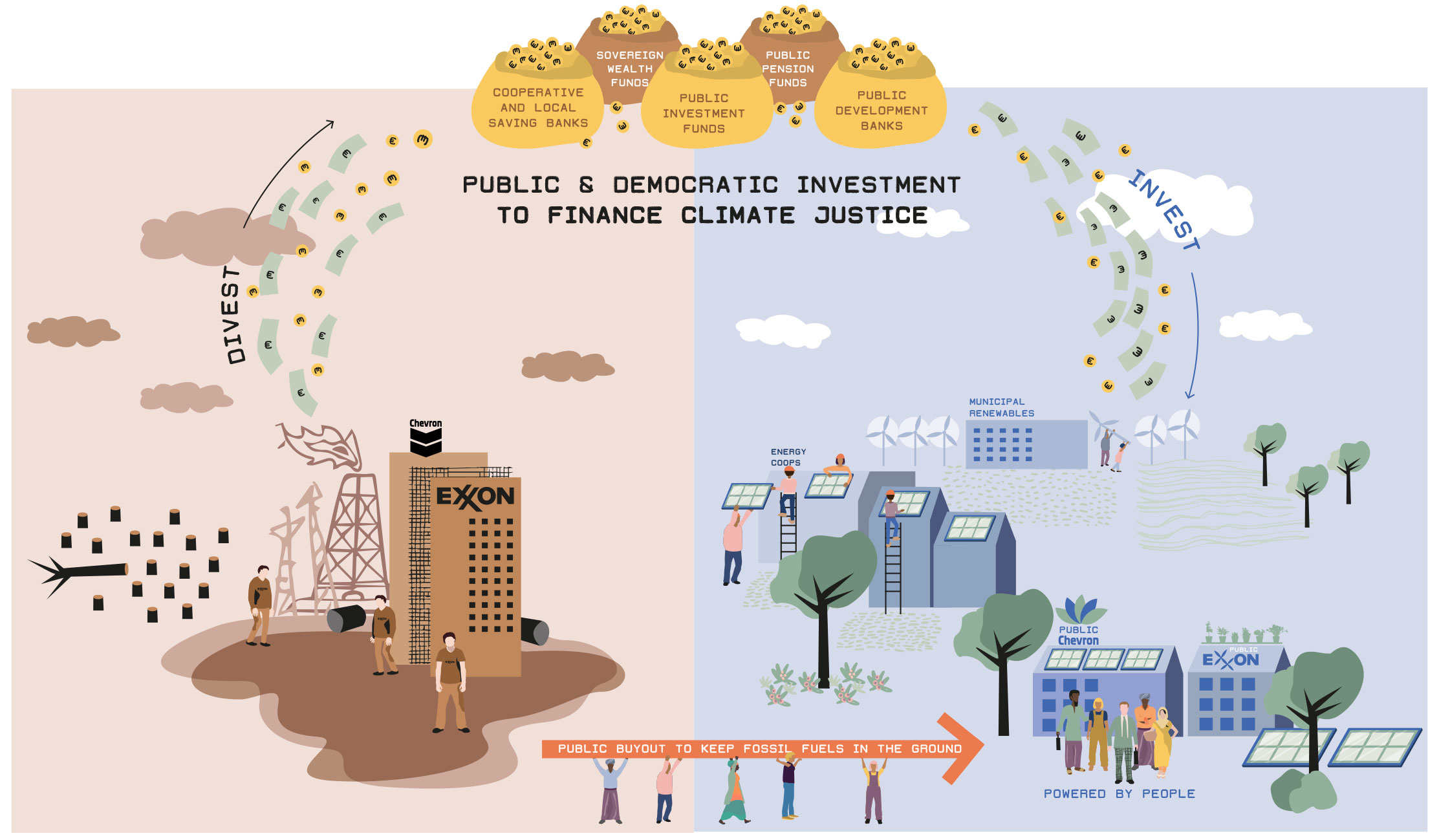 Ideally, this buyout would be democratically structured and would include planning around a just employment transition for displaced industry workers. Without an intentional transition, communities will continue to battle for industry investments which only result in high employment turnover and environmental destruction. As Carla reveals, estimates suggest that a just transition would produce a net gain of nearly 3 million jobs. Democratic public ownership can help to shape this transition and ensure benefit to areas that have been most impacted by disinvestment or climate change. Community members can have a say in how the economy will be revitalized in absence of the fossil fuel industry crutch.

Both Thomas and Carla relay the sense of urgency necessary around these issues. A new financial crisis is sure to be more detrimental than the last and would only exacerbate already high inequality. The impending climate crisis is also nothing short of catastrophic, requiring immediate action. Community wealth building and democratic forms of ownership and control at all scales can help make communities more resilient. These transitions may be mutually reinforcing; while community wealth building can work from the bottom up to build a more inclusive local economy and thus displace extractive industries, a just energy transition through federal-level overhaul necessitates some adherence to principles of community wealth building in order to preserve jobs and generate new, local economic activity. In both cases, alternative conceptions and approaches to finance can ensure not only that communities have the resources needed to confront crises but also that they are in control and can create an economy that works for them. 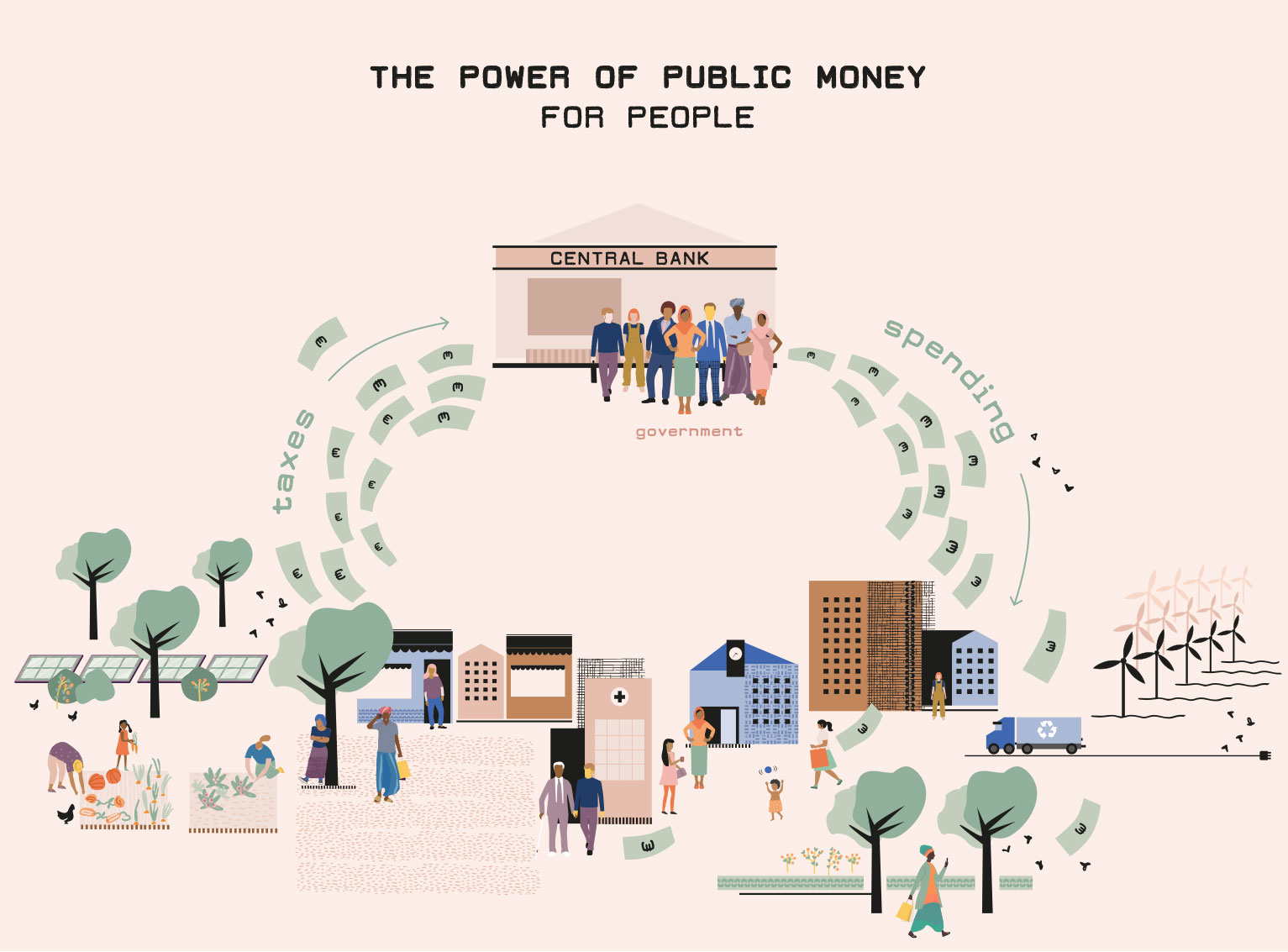